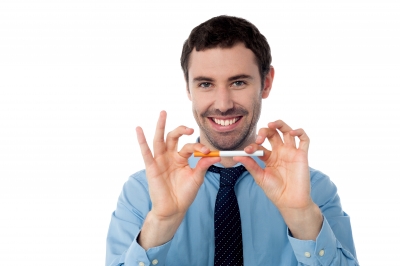 According to a recent study conducted by Örebro University Hospital, Sweden, smoking may increase long term risk of developing cataract. The study that involved 45,000 men found that quitting smoking gradually reduces cataract risk among smokers by more than 50% after 20 years.

“We have previously investigated the association with smoking cessation and cataract extraction among 35,000 women in Sweden aged 49-83 years,” said Dr. Birgitta Ejdervik Lindblad, the director of the project.

The following study, that focused on Swedish male population, also found an association between reducing smoking and decreasing cataract risk. At the beginning of the study, the risk of men who smoked 15+ cigarettes per day was 42% higher compared to non smokers. 20 years after quitting smoking, the risk was only 20% higher than for the non smokers.

For lighter smokers cataract risk decrease was much faster, but it never reached the level of people who never smoked.

“It is never too late to stop smoking, but it takes a longer time for the lens to recover with higher smoking intensity,” Lindblad said. “Smoking is increasing worldwide and health professionals and ophthalmologists should encourage people to stop smoking, or better never start to smoke.”